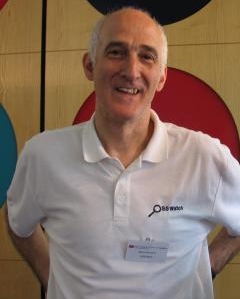 Even though I now live in Oxfordshire, I maintain a list of future races in North East England at www.northeastraces.com. This is frequently accessed by people in that area.

My main obsession at the moment is to run/walk all the footpaths of Oxfordshire. There is more about this project at www.oxonpaths.com.

some information about earlier projects

Whilst at Durham, I wrote several papers about Java, PHP, XML, C#, .NET and Web Services. I also wrote a book about programming in Java: it's called Understanding Java.

I still have my scrapbook from 1958 which contains 210 pressed wildflowers. In 2007, I created a digital wildflower scrapbook.

On Red Nose Day in 2009, a few of us from Computing Services at Oxford University did a 8.8 mile run visiting all 44 colleges of the University. Use this link to see where we went. Dominic Hargreaves recorded our run by taking photos of us at each of the 44 colleges. Here's a link to some other photos. Thanks to people's generosity in sponsoring me, 205 pounds has been given to Comic Relief.

I enjoy my holidays. My latest photos are from a trip walking the length of Lanzarote and a recent trip to the Kruger National Park in South Africa.